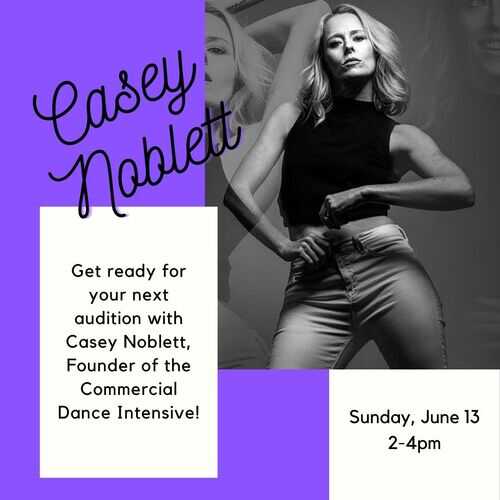 Casey Noblett is the founder of the Commercial Dance Intensive, a training program designed to take dancers from the studio to the stage and set. CDI provides webinars, videos, on-location studio workshops, a Winter intensive and two summer programs on both the East and West coasts. CDI teaches not only technique, but adds in the business side with seminars on taxes, college, unions, contracts, and classes in acting, heels, ballroom, on camera, mock auditions for Broadway, NFL Cheer, cruise ships, and LA as well as shooting a music video with an artist, auditioning for an agent, and taking headshots. www.commercialdanceintensive.com

Before building CDI, Casey danced commercially starting at age 10 with Jacques d’Amboise in NYC. She has performed at the White House, The Kennedy Center, Lincoln Center, the Smithsonian, and Madison Square Garden as well as Tokyo Disneyland, in Taiwan and in Caracas, Venezuela as Captain of the NBA’s Atlanta Hawks Dance Team. Her television credits include work with Gloria Estefan, Will Smith, and Chayanne, Extreme Home Makeover, MTV, CBS, and the Latin networks Univision and Telemundo. Casey has been featured in Dance Studio Life Magazine with her mother Toni and brother Cassidy and in Dance Spirit Magazine. She continues to teach master classes and choreograph at studios, universities and conventions and for NBA and college dance teams across the US as well as being a regional and national judge for many competition companies.

Casey loves being able to travel and help prepare the next generation of dancers to be successful in the industry that she loves! #areyoureadytowork