Tap with Charles Renato!
Note: This Event is Over
X Close 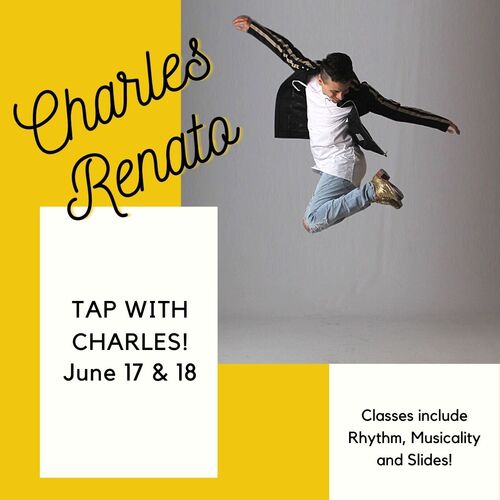 Charles Renato was born and raised in Sao Paulo, Brazil. He began tap dancing at the age of 6 years old in Sao Jose dos Campos. At 14yo he began teaching tap dance that lead to him win awards all over Brazil. He has won awards for Best Dancer at the Joinville Dance Festival and the TV Globo challenge show (2009 & 2010).

In 2008 Charles joined the cast of "Sinatra Blue Eyes" the musical in Lisbon, Portugal. Renato was also a member of the "KS Tap Company" which is responsible for bringing together highly sought after teachers from all over Brazil to perform. Mr. Renato international career has taken him to perform and teach in Croatia, Ukraine, Italy, Greece, UK, Netherlands, Mexico, Canada, Belgium, Ireland, Chile and Argentina.

Charles Renato was also invited to produce and create a section in one of the most prestigious event in Brazil called Carnaval. Since then he has been nominated for best choreographer of Desterro festival and Festidança in Brazil that has lead up to him teaching in America. Since he moved to NYC Mr. Renato has been working with Apt 33 directed by Chloe Arnold and performed with Michelle Dorrance and Dorrance Dance.

Renato has also been teaching at Metropolitan School of the Arts in Virginia. He also directed Apt 33’s new video “I’m not afraid” choreographed by Chloe Arnold. He’s part of the faculty at Broadway Dance Center and Steps On Broadway. At the moment Charles is Artist Resident at American Tap Dance Foundation.