Kathy Gray Masterclass
Note: This Event is Over
X Close 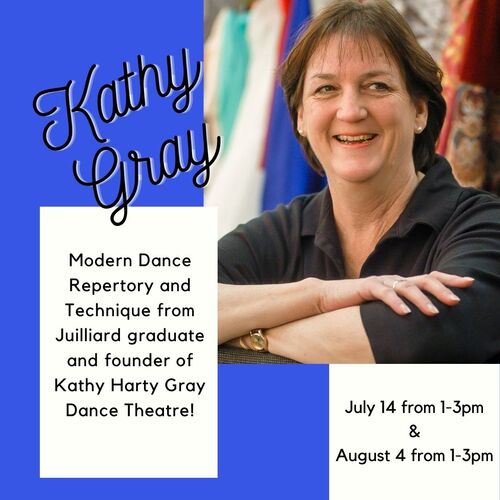 Kathy Harty Gray, a native New Yorker, earned her degree in Dance at The Juilliard School and MEd in Education from the University of Virginia. At Juilliard, she studied with dance legends Martha Graham, Jose Limon, Charles Weidman, Katherine Dunham, Paul Taylor, Luigi, Alfredo Corvino and Anthony Tudor.  Ms. Gray was a tenured professor at University of Mary Washington for nine years. She then moved to Washington, D.C. area and founded her company Kathy Harty Gray Dance Theatre (KHGDT) which performed regionally and internationally for over 35 years.  For 18 years KHGDT was a company in residence on the Alexandria Campus of NVCC, the 4th largest Community College in the country with 140 ethnic cultures.  With years of teaching and choreographing, she has managed her passion to keep Modern Dance alive. Her outreach in high schools, senior centers and community centers has educated and entertained thousands of audiences.  Ms. Gray has performed and taught in Italy, China, Russia, Japan, Mexico and the U.S.  She has presented narrated programs in multiple languages –French Spanish, Italian, Vietnamese, Farsi, Arabic, Russian, German, Chinese and Japanese to encourage communities to be a part of arts education. She has choreographed for colleges, universities, studios, TV, musicals, conventions and many dance companies and here recently at Lewisville Plaza Outdoor Summer Theater in 2017. One of her proudest moments was presenting and choreographing  “Grant Us Courage… Grant Us Peace” a work of healing and a tribute to the first responders and heroes of  9/11 and raising $20,000 for the Pentagon Memorial Fund. This work was been performed at the Pentagon and in other venues around the country since 2002.